Have you ever dreamt about being the one to discover that very rare thing, a site, a place, somewhere that you alone have found and can appreciate?

New Zealand can offer you a taste of undiscovered gems; hidden in this spectacularly beautiful country lies that prize. If you take the time to hike a trail, to cut a path through one of the lush green forests, observing the sun shine as it filters gently through the canopy, you will find that rare space. You can stand amongst the giants and breathe in the sweet forest air, knowing that you are the successful explorer.

As you follow a trail along the escarpment, with the sea below, golden sands stretching lazily in the sun, you will find a quiet spot, with no one in sight, and nothing but the sounds of the waves crashing onto the shore. Take the time to find a hidden cove on the beach, or follow a crystal-clear stream to its source, hidden in ferns and soft clumps of moss. Here you will be the single explorer, left to savour the magic of nature, the beauty, the colours.

Come and find your hidden gem, your treasure, your piece of peace. 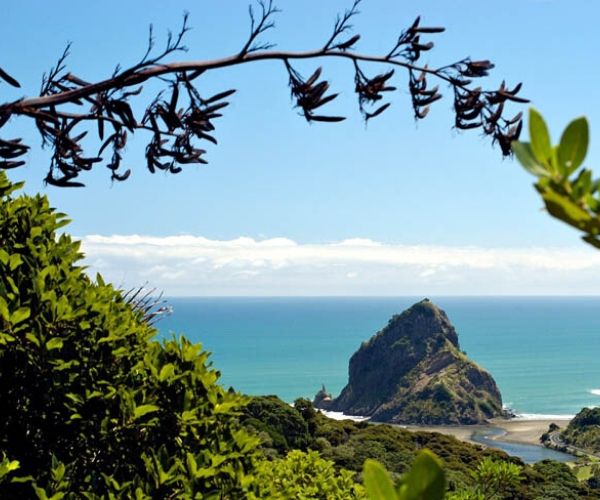 Hamurana is an area of natural springs on the northern side of Lake Rotorua in the beautiful and sunny Bay of Plenty Region on the North Island. It includes the deepest natural spring on the North Island, emerging from a rocky area within the beautiful Hamurana Springs Reserve. The springs border on the splendid redwood forests, which reach more than 70 metres into the air.

Although the Springs were originally a tribal settlement today it is an untouched park and wildlife refuge, which combined with the manaakitanga (hospitality) of the tangata whenua (people of the land) is a truly magical place to explore.

The peace and serenity of this natural site offers the visitor an opportunity to be surrounded by tranquillity, lush landscape along the stream, with flowers and ferns in a riot of colours. 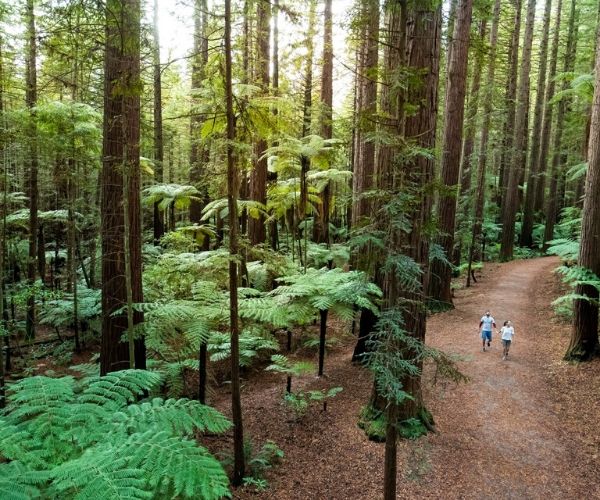 If romance is your touch point then this beautiful uninhabited Island nestled in the heart of Lake Rotorua is ideal. Mokoia Island is a sanctuary for many of New Zealand’s endangered wildlife and rare New Zealand birds. In fact, the bird song as you dock on the island is astonishing and the little New Zealand fantail is always the first to greet visitors. This endearing little bird often flies within a metre or so of humans, its loud song carrying sweetly through the air.

The island itself is sacred to the Te Arawa people, dating back to 1350AD and has a fascinating history. Maori legend has it that Mokoia Island was a witness to passionate love story between Hinemoa and Tutanekai. Hinemoa, was the daughter of a chief who lived on Mokoia Island, and was forbidden from leaving it.

Yet, she fell in love with Tutanekai, an illegitimate boy, who lived on the mainland across the lake. It is said that he would play hauntingly sad tunes on his flute by the lakeside each night, the sounds of which carried across the water to the Island where the young maiden yearned to be with him.

One night, Hinemoa swam across to the mainland to reach her lover, guided only by the sound of his flute. Despite the long swim in the cold water, she reached her true love and they became inseparable. Hinemoa and Tutanekai were final wed and their families made peace. 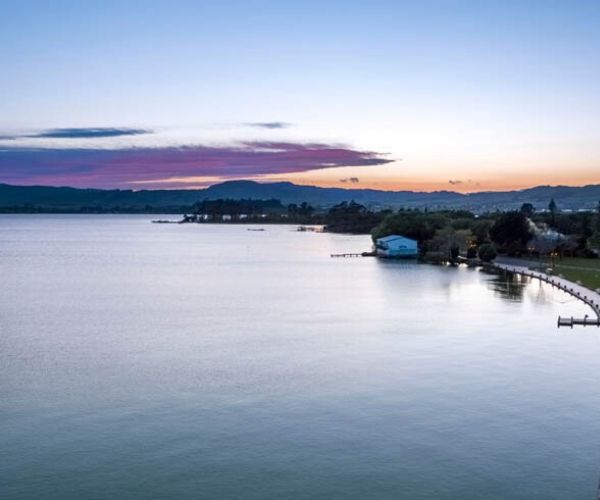 Exploring the wilderness that is the Abel Tasman park is in itself a wonderful experience, with the golden beaches, granite cliffs and coastal track. And then to discover the little known Tokangawhā, or Split Apple Rock is just the cherry on top. This geological rock formation in the Tasman Bay in the South Island of New Zealand is made of granite and is estimated to be about 120 million years old. It is aptly named as it is in the shape of an apple that appears to have been cleaved right down the middle by some dramatic event, and then just left.

The Maori legend is that the rock was split open by two warring gods in a bid to possess it, and so to resolve the matter they broke it in half. 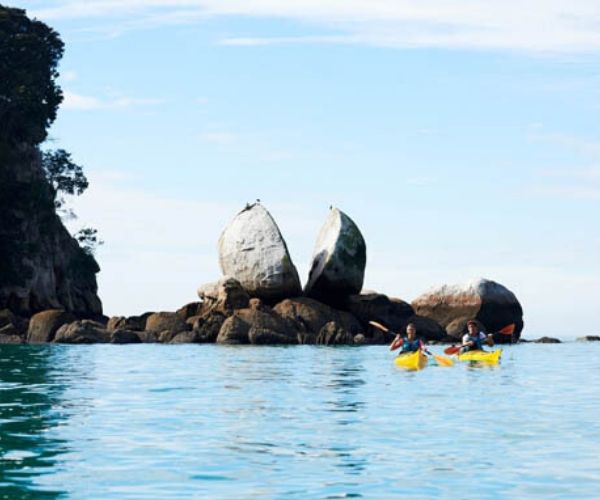 The deepest lake in New Zealand, Lake Hauroko, also known as Lake Quill, due to the discovery by a young surveyor named William Quill back in 1890. Quill scaled the side of the Sutherland waterfall and found the lake that feeds the falls. He was quoted as saying that if he lost his footing he would be “dashed to pieces hundreds of feet below.”

The lake occupies a small rock basin that was formed during the Ice Age, and tumbles down a near-vertical mountain-wall into a valley.

This magnificent fresh water lake in the Fiordland National Park in the South Island can only be reached by foot. The terrain is pretty inhospitable, and the ambitious few who make the hike are sure to be impressed by the magnificence.

If the walk seems to daunting then your next best option is to view it by helicopter, possibly better as the lake has an impressive depth of 462metres and stretches an impressive 30 kilometres, best seen by air. 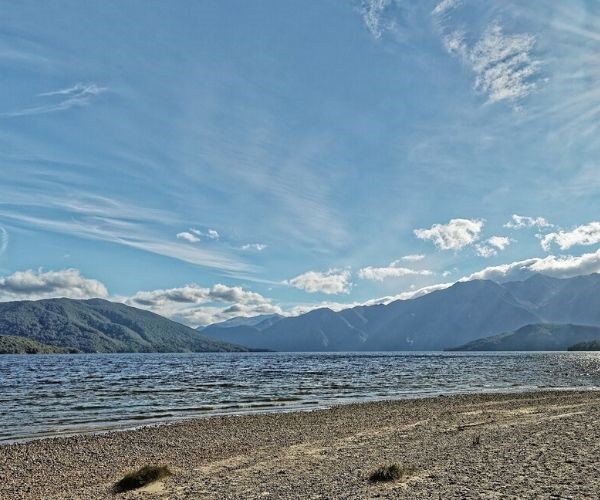 The imposing Maori rock carvings nestle in a small cove on Lake Taupo and are only accessible by boat or kayak. These truly impressive carvings stand at over 10 metres tall and are of particular cultural significance to both area and region. They were created by master carver Matahi Whakataka-Brightwell, who felt a calling to create contemporary Maori carvings in the lakeside rocks, one huge face and two smaller figures of Celtic design

The largest carving pays homage to a visionary navigator who guided the Tūwharetoa and Te Arawa tribes from their Polynesian homeland to the Taupō area over a thousand years ago. The smaller figures are meant to depict the south wind.

Lake Taupo is in itself a gem to explore, as the largest lake in New Zealand it has a perimeter of over 193 kilometres across Taupo, on the North Island. The crystal-clear waters shimmer against a backdrop of snowy mountains in the distance. And all around lie hidden coves, private beaches and untold magical spots to explore. 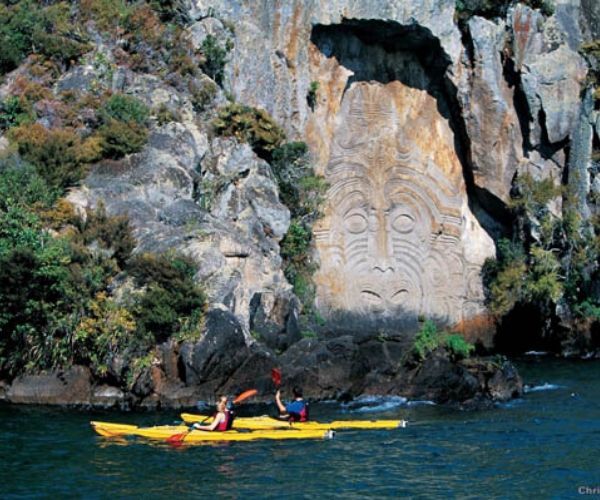 Let New Zealand unlock your inner child, come curious, come to find the wild, there is so much more to explore.